This week, I’ve been in Brussels once again – my third visit this year!

I’ve journeyed to the continent and the EU capital, “encore une foi”, to protest for the rights of EU citizens – especially British ex-patriates, who may risk being affected worse than any other group of Brits, in the event of a Brexit deal which damages their rights to live in the EU and EEA, or in the event of a “no deal scenario” – which of course will likely devastate Britain’s trade, economy, and global standing. All of these are still lingering possibilities, as Prime Minister Theresa May has visited since Wednesday, for a Council of Ministers summit, which continued until the end of Thursday 18th October.

At a protest stunt for Alliance Europa, very near the European Council and European Commission buildings, I was seen and photographed by the press, “Jumping on Brexit” – or, more specifically – jumping on the STOP BREXIT button! A trampoline, clad in red, and with the clear word STOP emblazoned upon it, was a physical representation of the EMERGENCY STOP that we need, to put as soon as possible, on this process of leaving the European Union, which British politicians now KNOW will do considerable damage to the country. 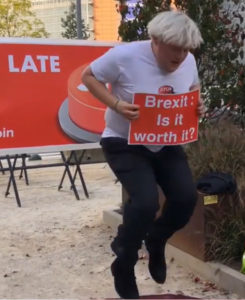 Amongst other news sources, our event was covered by EuroNews.  We also received rather predictably bitter coverage, from the Daily Express – clearly showing again, that pro-Brexit sources of news and propaganda show their desperation easily, when they’re scared!

With this show for the press, who truly needed to see another side of the argument from what Theresa May was seeking to propose in Brussels, I’ve given a clear endorsement to a People’s Vote on the final Brexit deal, with an option to Remain, alongside MEP’s and other Proud Europeans. With the help of Alliance Europa, Best for Britain, European Movement UK, and other affiliates of this event’s organisers, we’ve managed to make a statement to the UK government, and the EU, that the time for going round in circles, about “backstops”, “transition periods”, “technical notice measures”, “customs agreements” and other overly complex jargon, is over.

In June 2016, Britain voted for what they saw as a simple solution. That solution has shown now, that it is truly not simple at all. It is costly, and pointless, and will bring no benefit to the British people, or the economy.

I am not only jumping on imaginary buttons, by continuing my campaign against the colossal farce that is Brexit.
I am making a stand, on the very simple position, that more than 17 million people in 2016 didn’t know what they were voting for.

“But they DID know what they were voting for!”, we hear the cries from Farage and his con-patriots (see what I did there? 😉 )

Well, in taking my stand, I also give the Brexiters this reply…..

…. Bitch, please!!!
I walk down any high street in England, and no matter whether I’m wearing a suit, or anything else, most people will still think that Boris Johnson is in town!

The only benefit that this whole insane Brexit shambles brings to the UK, is the lesson that most British voters are VERY EASILY FOOLED!

But Britain deserves a chance to show the world, and the billionaires who engineered this whole disgusting right-wing coup and expect to benefit from it, that its people will NOT be fooled twice!

Tomorrow (Saturday 20th October), I will be marching with many thousands of people, calling for a People’s Vote on the final Brexit deal, WITH AN OPTION TO REMAIN IN THE EU!
I look forward to seeing everyone who will be joining us, in this historic episode of British history, standing up for truth, and a fair democratic process!